The Duke of Beaufort’s Hunt would like to inform all those who wish to show their support for our hounds, that the annual Boxing Day meet will this year be held at 10.45am at Worcester Lodge, Didmarton, Gloucestershire on Monday, 27th December 2021.

Boxing Day falls on a Sunday this year - a day when trail hunting does not take place – so hunts across the country will host their traditional Boxing Day meets on the Bank Holiday Monday instead.

Matt Ramsden from the Duke of Beaufort’s Hunt said: “The Beaufort Hunt is delighted to be meeting at Worcester Lodge this year and we look forward to welcoming local residents, supporters, friends and families again, after being unable to do so last year due to Covid restrictions.  We hope that people can plan their festivities to ensure they are still able to show their support for our hounds and we look forward to seeing people there.” 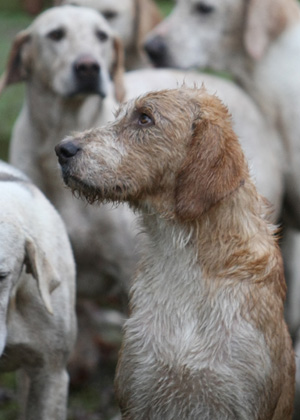 A new initiative has been co-ordinated for Cheltenham General Hospital called Food4Heroes. This supplies much needed meals for NHS hospital staff, many of whom are too tired or busy to shop/cook for themselves at the moment.

Foxy Ladies Catering are providing 300 microwavable meals every Saturday and Sunday and Hey Pesto Catering had already agreed to generously provide & deliver the meals during weekdays for NHS staff at Cheltenham General Hospital during the peak of this crisis. The service is completely free to the NHS staff but it needs urgent funding in order to cover the costs. At Gloucester Royal Hospital, Hey Pesto Catering are also kindly providing meals during the weekdays and RelishCatering are providing for the weekend.

Each week 2,100 meals are delivered to each hospital. Each meal costs £2 to produce, costing £8,400 in total each week so we need funding to sustain this until at least the end of May.

If you would like to donate to Food4Heroes to fund these meals there are 2 options - either go to http://www.food4heroes.co.uk and click on Donate and specify South West. This is via Crowdfunding and no Gift Aid is claimable.
Alternatively, if you wish to donate using a CAF cheque or a donation for over £100 either by cheque or BACS, you can do this and then Gift Aid will be payable. Cheques should be made payable to Northamptonshire Community Foundation (Reg Charity 1094646) and sent to Atty Beor-Roberts, Hampnett Lodge, Northleach, Gloucestershire, GL54 3NW.
If you require the BACS details or a Gift Aid Form (for cheques) please email attybr1@gmail.com

Northamptonshire Community Foundation are very kindly processing these payments for Food4Heroes around the country so that they benefit from the Gift Aid.
We have received amazing feedback from the NHS Staff who have so far benefited from these meals.

Thank you so much for reading this and I hope that you are all looking after yourselves.

We are pleased to produce our directory of local farms and businesses who are able to deliver or provide collection of fine produce during these exceptional times.

Forbidden Fruit & Veg Market Garden, is growing veg, herbs and fruit to organic principles in one of the walled gardens at Badminton. Our £10 weekly boxes contain a variety of seasonal veg and salad. Collection is from the horse box under the clump of trees at the large gates at Kennel Drive, Badminton after 11am every Thursday.

Bennetts Farm Shop is a new innovative self service farm shop based in Leighterton, which offers grass fed Aberdeen Angus beef bred, raised and produced by Simon & Tara Best, as well as many other quality local products. There is also a milk vending machine with freshly pasteurised whole milk from the diary herd of Nick & Sam Lambert at The Leighterton Dairy. https://bennettsfarmshoptetbury.com

‍Dauntsey Farm Shop - https://www.facebook.com/dauntseyfarmshop/
‍Collections of all meat, veg and dairy produce made up to order

‍Brinkworth Dairy - https://www.brinkworthdairy.co.uk/
‍Free milk deliveries in the Dauntsey, Somerford and Minety areas or by courier anywhere *Register your interest in friendly veal too on 07977 580281*

Cotswold Wagyu Beef - info@cotswoldwagyu.co.uk and 07968 753 818
Free delivery within 20 miles of Tetbury with special offers on pies, roasting joints and burgers

Baraka Catering​- www.barakacatering.co.uk
Making & delivering fresh made meals to eat or pop into your freezer. Delivery is as far as 20 minutes from Chippenham.

Peter & Delia Tutcher, New Farm Beef, Alderton
We have a supply of Aberdeen Angus Beef, all locally butchered as from 28th May 2020, also free-range eggs.
Happy to deliver locally
Please telephone or text 07891 280 119


Not on the list? Please send details to mjr@beauforthunt.com

ABout the duke of Beaufort's hunt

The earliest records of hounds being kennelled at Badminton date back to 1640 when the then Marquis of Worcester hunted mainly deer, but hare and fox as well. A detailed history can be accurately traced from 1728 but it was not until 1762 that the 5th Duke of Beaufort, returning with his stag-hounds after an unsuccessful day put his hounds onto Silk Wood - now part of the Westonbirt Arboretum - and had such a fine run with a fox that henceforth he concentrated on foxhunting; hunting the country around Badminton - now the Beaufort - as well as a large area of country north of Cirencester now the Heythrop.
‍
Dukes of Beaufort have either hunted hounds themselves or have been in the Mastership since the title was created in 1682 and the hounds, kennels and stables still belong to them. The 10th Duke was master from 1924 to 1984 and so great was his contribution to foxhunting he became universally known as "Master".  The Beaufort is one of the few remaining private packs although it is basically financed by subscription.
‍
The hunt dress is peculiar to the country in that the Huntsman and Whippers-In wear green and the subscribers a blue coat with buff facings - the Beaufort Liveries. 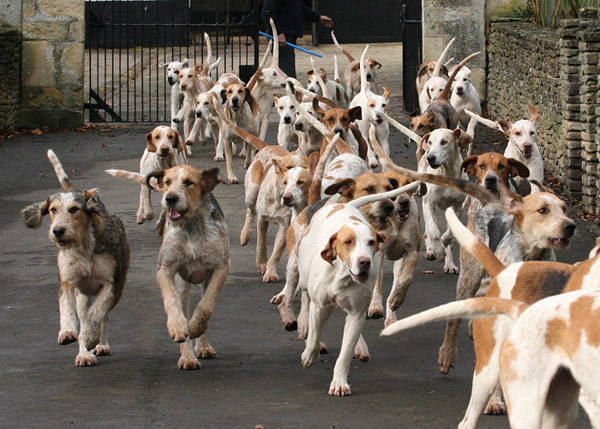 Film of the Beaufort Hunt in 1914 consisting of the meet at Chipping Sodbury and various places that you might recognise! This film is stored in the British Film Institute and was found by Tim Sage 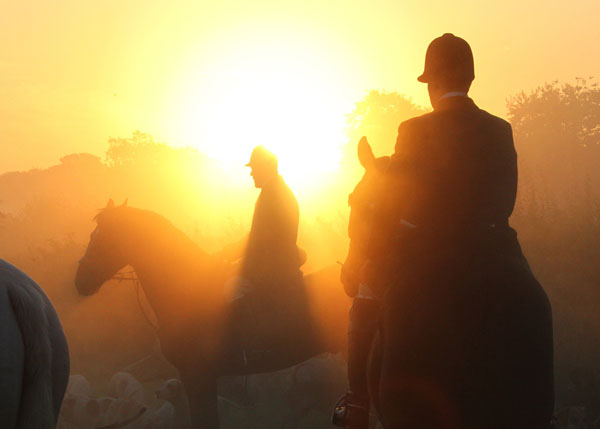 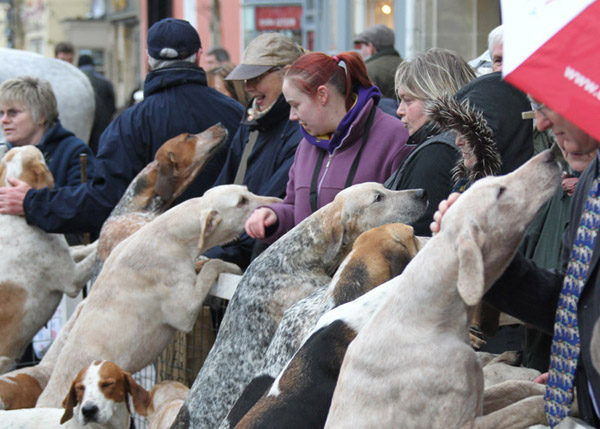 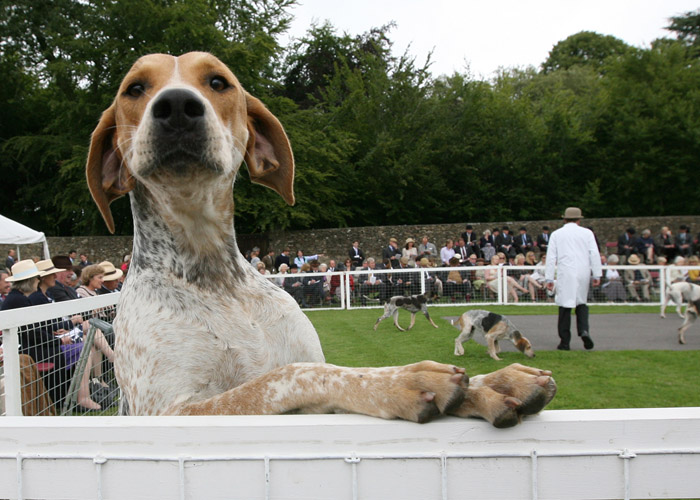 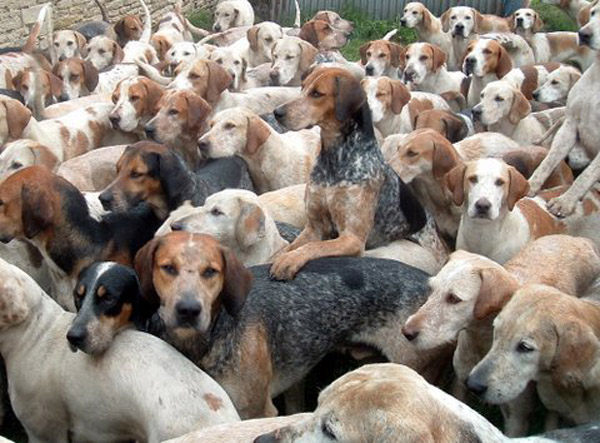 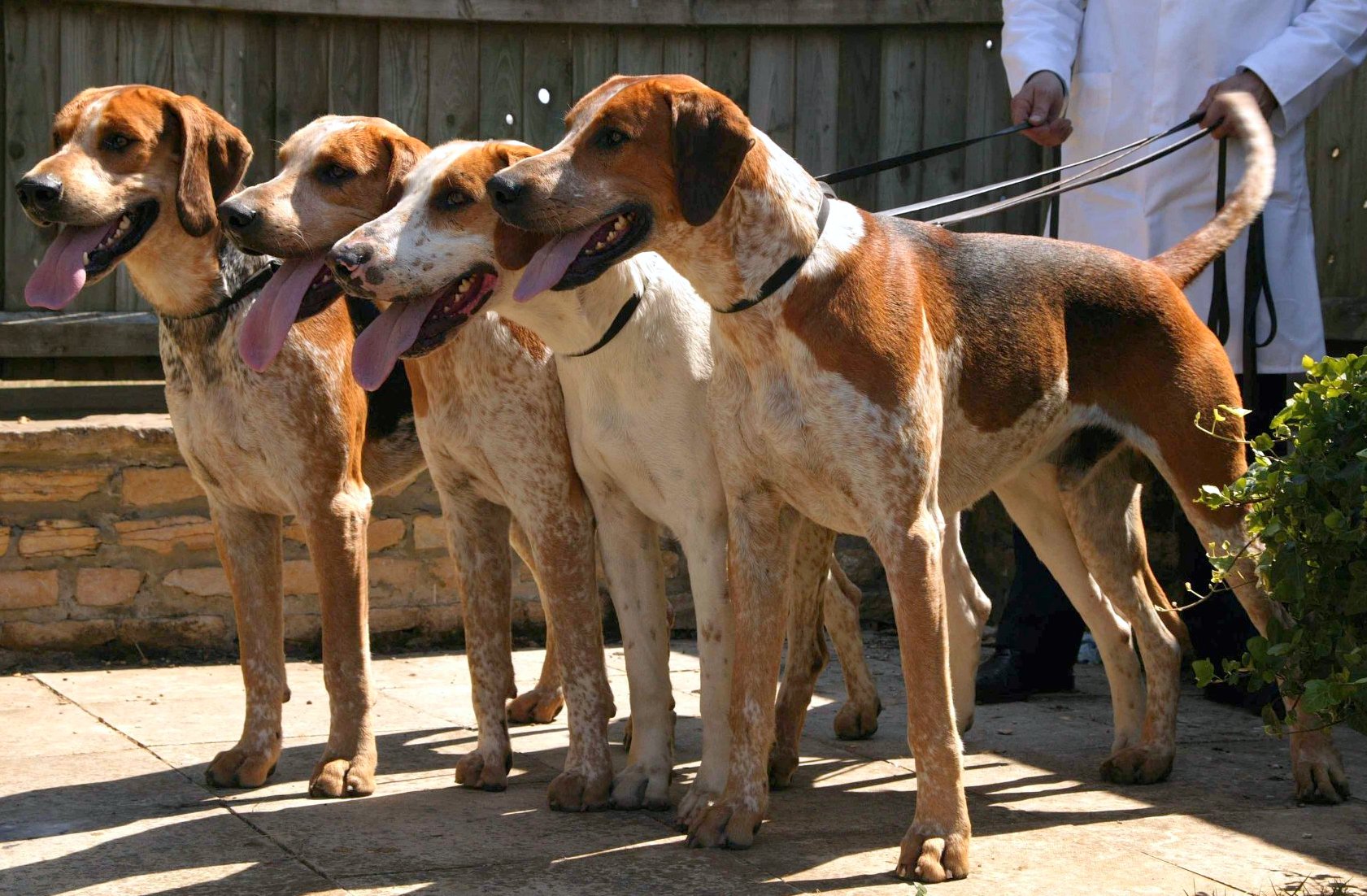 Hounds have been kennelled at Badminton since 1640 but the pedigree records have only been kept up since the mid 1700's. The furthest back an individual hound can be traced generation for generation is 1743,  approximately 59 generations in all. This makes the foxhound one of - if not the - most chronicled animal in the world today. During this time they have been systematically bred for the sole purpose of hunting the fox, although since 2005 now a trail with an emphasis on nose,stamina, and character.

All the puppies bred at Badminton are put out to walk on farms at 6-8 weeks and some of the puppy walkers are the 3rd and 4th generation of families to do so. The fact that they live with a family for their formative months helps bring out their genetic friendliness. Anyone who has visited a kennel or seen hounds at a show surrounded by children can vouch for this.

Hounds are the most magical animals to work with. The Beaufort Hounds are also famous for their conformation - in particular their size and quality. They win prizes at all major hound shows and their blood lines are in demand in many other kennels in this country as well as America,Canada, Australia and Europe. Their consistent size and quality owes much to the fact that they have been bred by one family since their inception, and to the selective breeding programme carried out by 'Master' the 10th Duke for sixty years. He controversially introduced a Welsh outcross in the 1930's through a Brecon Bitch Petrel `32, now one of the strongest female lines in the Kennel. More recently there have been a number of Welsh outcrosses, in particular Plâs Machynlleth Miller `63, through New Forest Medyg `69, an outcross which produced a famous stallion hound and Peterborough Champion Duke of Beaufort's Monmouth `77. When Captain Ian Farquhar arrived from the Bicester in 1985, he brought bloodlines lines from another Welsh outcross with him that of  Vale of Clettwr Fairy `73 whose progeny was passed down predominantly in the Beaufort Kennel through Bicester Farrier `84 , who also had the New Forest Medyg line. The Welsh blood was added to again by usinga stallion hound from the famous David Davies Welsh pack, Bouncer `94 a line that produced outstanding quality hounds such as Bailey 2003 one of the most influential dogs of his era, winning Peterborough himself and siring at the Beaufort alone 4 more Peterborough Champions stamping his progeny with size and class as well as ability. Bombardier one of his sons became the first rough coated dog to win the championship at Peterborough.  Halifax `06 another Peterborough champion (by Bailey) has also been a prolific sire who through his dam Fanfare`01 had the best of the Midland Hardaway (USA) blood.

In 2004 renowned hound judge Martin Scott wrote:
‍
"In 2004 the Duke of Beaufort's celebrated its 50th Peterborough championship win. This quite some feat especially when the nearest rival is the Heythrop with just 27 champions over that time since 1887. Being champion does not necessarily mean they are the best working hound, but it does mean that the judges at the time considered them the best looking hound. However, it is has always been Capt Farquhar's breeding policy to breed from only the best workers."

Click the button above to see a list of those champions from Badminton and they year they were made champion. The year or numbers after their name denote the name they were entered, which is important and saves confusion, for example in 1960 Duke of Beaufort's Palmer `59 was champion while his name sake Palmer `02 was champion in 2003 and another Palmer `83 was champion in 1985!

‍
The Hunt has an annual Charity Meet in January each year and in addition also collects for the Earl Haig Poppy Fund each November at the Opening Meet and for the Hunt Staff Benefit Society on Boxing day.

The various constituent parts of the hunt also give to many local causes such as:

The Beaufort Hunt and The Beaufort Hunt Supporters Club make numerous donations to charities local and national throughout the year from the proceeds of hunt functions and collections at Meets.