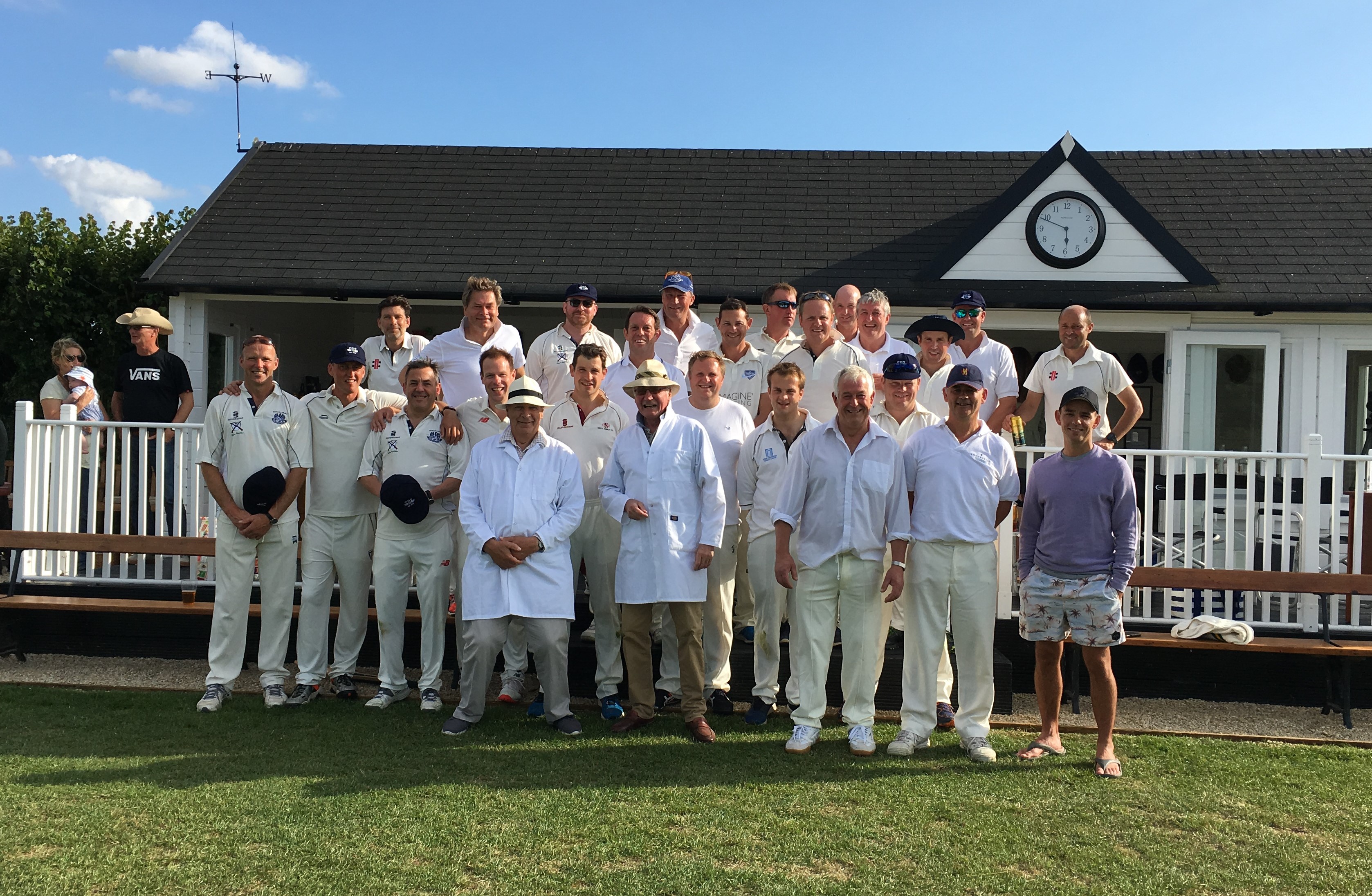 The Beaufort Hunt’s eclectic team, captained by David Maidment, were hosted at James and Bec Gay’s stunning ground at Lordswood House against a home side. Having lost the toss and been put in to bat, the visitors started strongly with Matt House (Pike) scoring fast and Robin O’Kelly holding his end up with deftness. Following Matt’s retirement, Rick Montgomerie looked dangerous before being caught off Ant Hibbard’s bowling which gave leave to Matt Ramsden’s speedy cameo before he was caught and bowled courtesy of Philip Hall. Our host then put paid to Robin O’Kelly after a useful 17 runs from him while Neil Starsmore was keen to get back to the bar after some running between the wickets.

David Fitch-Payton, our tame DJ, then provided the sun and rosé seeking spectators with some fine stroke play before an unfortunate run out. Playing for the home team,Andrew Hibbard single-handedly dismantled the visitors’ tail end; clean bowling not only Tom Collins and Johnny McCoy, but also D. Maidment who was only to ohappy to turn a few more ducks on the BBQ. John Curtis and Mike Hibbard rounded off the innings, seeing out all 22 overs without capitulating and adding to the team’s total of 115. Not a record for the ground it must be admitted!.

After a brief intermission it was James Gay’s home side’s turn to chase down the runs - which they did with comparable ease. However,that was not without a hearty fight from the hunt team. Mike Hibbard was the first bowler to open his account of wickets, taking two in his spell, the most enjoyable perhaps being that of his son, Andrew. Charlie Dando had clearly found time for some practice too and produced a tidy over before Neil Starsmore skittled out Simon Pearce. Johnny McCoy made a fine catch off John Curtis’bowling to dismiss James Smith while David Maidment worked two run outs in his part as wicket keeper. Rick Montgomerie rounded off the performance with a caught and bowled which left Fraser Bush un-bowed. During the home side’s innings, James Gay showed us all how it’s done with three meaty 6’s.

It might not have been the Beaufort Hunt team’s day but things were finished well in time to listen to the final hour’s play at Lords, culminating in a dramatic victory for the English. A great day for British sport as there was a tennis match being played too apparently. Thanks must go to our umpires, Cpt Farquhar and Nigel Maidment, Toni Ponting for her organisation and James and Bec Gay for their generosity and welcome.  Roll on next year!