Every year on the first Saturday in March, the small South Gloucestershire village of Didmarton plays host to Point-to-Point enthusiasts from all over the county who make their annual pilgrimage to the Duke of Beaufort’s Point-to-Point.

The course is laid out on land adjacent to Manor Farm, Oldbury on the Hill by kind permission of the Tuck Family and Swangrove Farms, and is easy to find as it is situated just across the A433 from a major local landmark the Grade 1 Listed Worcester Lodge.

Due to changes in ownership or farming practices course longevity is not one of the sports strong points, so for one to last 75 years is a major milestone. It moved to its current location in 1947, prior to which it led a nomadic existence which saw the meeting staged at approximately 15 different venues over the preceding 40 years.

Some publications state Didmarton opened in 1956. However, during its early years it was referred to as Oldbury on the Hill, but a 1954 course map (see below) proves conclusively they are the same course.  In fact, the fixture had not moved far from the pre-war course at Leighterton (1930-1939), which is less than half a mile from Didmarton. 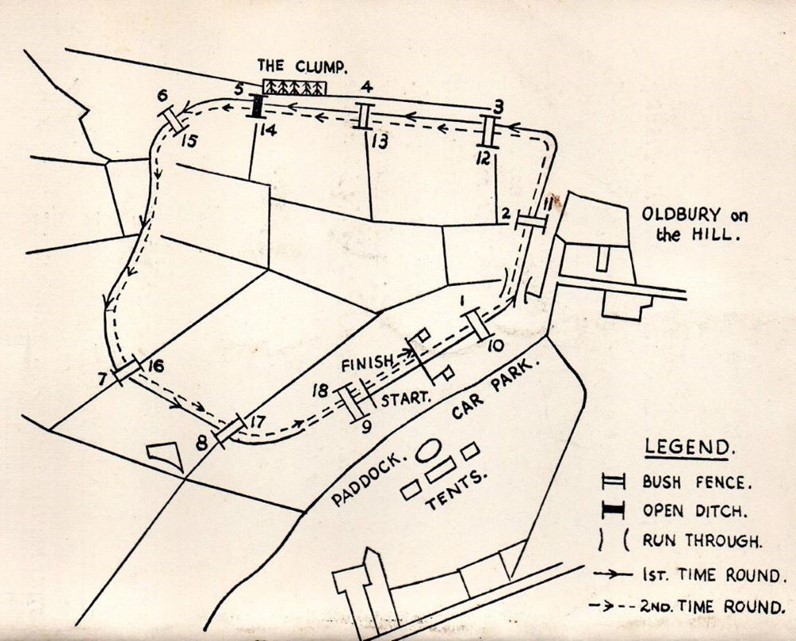 Originally, the start was just in front of what is now the last fence, which meant the runners did just over two circuits, and the course would have measured approximately three and a half miles. The start was subsequently moved to a chute at the start of the back straight and has remained there ever since.

Those of a certain age and with long memories will recall 1947 was the year of the “bigfreeze” which lasted from the end of January until the middle of March with a majority of the country blanketed in snow and frost. This was followed by floods which resulted in major changes to the fixture list with the Beaufort fixture being staged on 10th May and the season finishing 2weeks later on the 24th.

The following year Bill Bush was second in the Members on Solomon II while renowned Show Jumper and 1956 Olympic Bronze Medallist Pat Smythe finished runner up in the Ladies on Dandy Dick II before taking the Ladies on Skate II two years later.

Up until 1956 this venue was used as the steeplechase phase for the world-famous Badminton Horse Trials, but since that time it has become one of the most popular Point-to-Point courses in the country with a plethora of trade stands and has become part of the county’s social scene.

There have been hiccups along the way, notably in 2006 when the meeting was given the go ahead despite the frost stubbornly refusing to release its icy tentacles which meant that just 10 runners contested 6 races.

The Queen Mother visited in 1954 and actually had a runner who finished second in the Members in 1957. 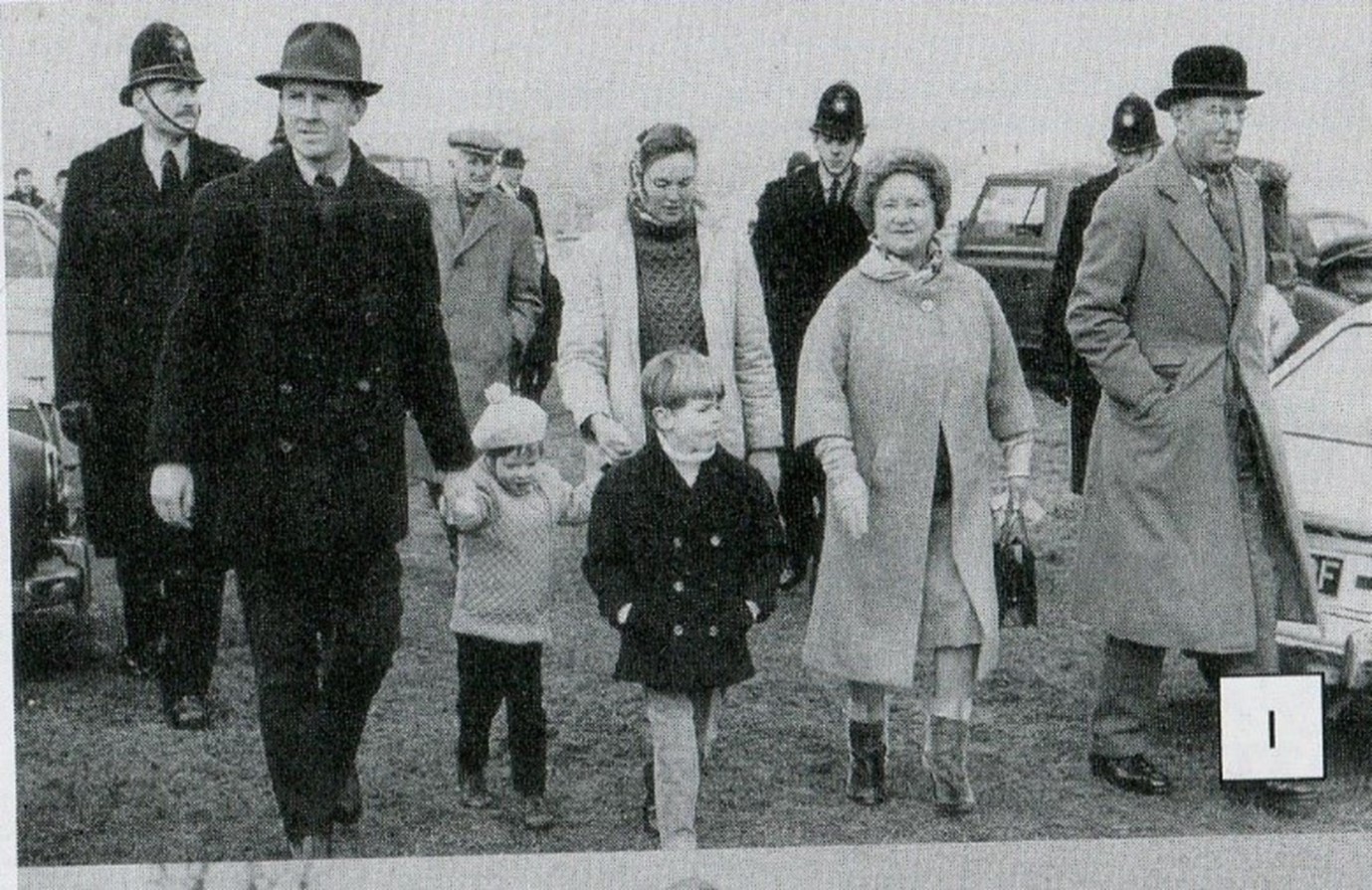 It was reported that her appearance in 1954 may well have accounted for what “is believed to be the one and only Point-to-Point appearance of that celebrated turf advisor, the late Ras Prince Monolulu, who is always associated with the catchphrase “I’ve gotta horse!”. His ostrich plumes looked particularly sorry for themselves by the end of a very wet afternoon”.

It is remarkable that names associated with the early days of the course are still involved 75 years later. These include Bill Bush who finally achieved his ambition and claimed the prize which had eluded him for so long when Innisfoil won the Members in 1972.

This race was run in a snowstorm and it was later stated that due to moisture from the snow he collected on the way in his woollen colours he weighed in 17 lb heavier than he weighed out! His son Nick had been successful a couple of years earlier while Steven added his name several years later.

1965 was the first time Bronze Miller came to our attention, with Peter Cave’s front runner’s flaxen mane and tail visible on the skyline. His catch me if you can tactics proved successful throughout this career when he racked up 26 victories.

In 1967 a Division of the Open Race was won by John Wills Juan, who went on to win the Aintree Foxhunters the following year and several decades later Wills was instrumental in setting up the Heythrop’s new course at Cocklebarrow.

The following year Cuddle Up owned by David Somerset (11th Duke of Beaufort) finished second in the Members behind Touch and Go II but finally opening his account in a Woodford Maiden. The successful jockey was none other than Ian Farquahar, who later in his career spent 34 years as one of the Joint Masters of the Beaufort.

1969 saw anun-raced 5-year-old named The Dikler make his racecourse debut, where he finished second behind Touch of Tammy with a host of top-class horses trailing in their wake. The runners read like a who’s who of the Pointing world and after several unsuccessful attempts The Dikler finally took his place in the history books by claiming the 1973 Cheltenham Gold Cup.

The course came to the rescue of the Avon Vale when they had to move from Monkton Farleighin 1965 and Didmarton became their home for the next 10 years, (except for a temporary moved in Siddington in 1972), before settling at Nedge.

The Fay Geddes ridden Marshalsland won an astonishing 16 races at Larkhill but also had a soft spot for Didmarton as he won the Ladies Race for 5 years in succession between 1972 and 1976.

1973 Nick Bush made a little bit of history by riding four winners on Sailor Prince(Members, Greetings Telegram (Maiden), Innisfoil (Division I of the Open) and crowned an exceptional day when Dancing Air dead heated with Hope Again in Division II of the Open.

In 1976 Ladies were allowed to ride in the Members and Sue Horton (nee Aston) was the first to breach this bastion on her father-in-law’s Straight Lane, beating off the challenges of Nick Bush on Innisfoil and Tony Harris on Gusserane.

Soon afterwards Tim Sage took the Members on Brandenburg but had to wait some time before he did so again when Presentandcorrect carried his colours to victory in 2013.

The darkest day in the course history was on March 4th 1978, when 28-year-old Long Newnton farmer John Pickford rode Lacking Ray in the Members. The combination took a heavy fall at the 5th and died instantly as a result of his injuries.

In 1980 audiences at Didmarton had their first glimpses of a young lady who was to become one of the icons of the sport and Champion Lady Rider on multiple occasions with Alison Dare scoring her first win on Silvertown.

Spring Holiday made his debut in the Members in 1982 at the age of 10. The locals were aware of his reputation because he won in the fastest time of the day carrying the colours of the Duke of Beaufort’s stud groom Brian Higham.

This same year saw the introduction of the highly successful Buchanon Cross Country Members race series. 39 runners faced the starter with Princess Michael of Kent finishing amongst the also rans, 34 lined up the following year, 35 in 1984 and 29 twelve months later.

Although highly popular with the participants, the races were difficult to follow as riders wore normal hunting dress and no distinguishing colours and the races disappeared into oblivion when the sponsors withdrew their support.

Didmarton had to be abandoned in 1986. They had attempted to rearrange their meeting but were thwarted by an objection by Chepstow Racecourse, who thought, it would have a detrimental effect on their attendance figures.

David Dando won the Members Race in 1989 and 1990 but it took another 25 years before Charlie Dando got the family name back on the trophy following Carrig Dubh’s victory in 2016.

Leading Australian Equestrian Matt Ryan rode Leading Artist to victory in the 1991Members but went onto to greater things by becoming a Triple Olympic Gold Medallist.

He was following the trend set by Lt Col Frank Weldon years earlier who had won a Team Gold and Individual Bronze at the 1956 Stockholm Olympics, as well as being European Champion in 1953/54/55 to add to his wins at Didmarton.

Weldon and Snowshill Jim took the Members in 1959 after winning Badminton twice in themid-1950’s. He later became involved as Course Designer and Director for 36 years and a Trophy bearing his name is now presented at these famous trials.

1993 saw 20-year-old Bath University Student Alice Plunkett score her first win after an enterprising ride on Bold Kings Hussar in the Ladies Open. She is now part of the presenting team at I.T.V. racing.

Granville Grill and John Deutsch ran up a sequence of wins in the Members between 1998and 2000, while Sheknowsyouknow and Presentandcorrect were others to enjoy multiple course successes in the last 12 years.

The course has provided invaluable experience for many top-class horses who have subsequently gone on to score at the highest echelons in the sport.

Following in the footsteps of The Dikler, Cool Dawn (1998 Cheltenham Gold Cup winner) won a Division of the Restricted at Didmarton 4 years earlier. Ridden by his owner Dido Harding his performance at this meeting was described “as remarkable and had to be seen to be believed”.

Leading at the 10th he ran straight on instead of negotiating the bend into the back straight, before stopping completely. He was back in the lead three fences later and won in the fastest time of the day.

Rushing Wild made his debut as a 6-year-old in 1991 and won a 13 runner Maiden on his second outing at Didmarton. The horse made his rules debut in the 24 runner Foxhunters Chase at the Cheltenham Festival which he won easily before finishing second to Jodami in the following years Gold Cup.

Katarino, a Triumph Hurdle winner at the Cheltenham Festival then turned his hand to Point-to-Pointing and won the Mixed Open at Didmarton, prior to scoring the first of his two Foxhunters successes at Aintree Foxhunters in 2005 and 2006.

Earthmover was a dual winner of the Cheltenham Foxhunters. Undefeated in 7 outings in1997, one of those included an emphatic win in the Beaufort Ladies Open. 12 months later he went on to score his first victory at Cheltenham in the hands of Joe Tizzard.  His second win was unique because it came 6 years after his initial success in the Festival showpiece.

Experiences over this course continue to provide a good grounding for horses later in their career with Santini who finished second in the 2020 Cheltenham Gold Cup winning a Maiden over the course back in 2017.

Despite numerous top-class horses galloping through the starting gate only 8 horses have broken the 6 minutes barrier at Didmarton, with the current record of 5 minutes 57 seconds set by Raleagh House in 2010.

The Beaufort Point-to-Point has been lucky with secretaries who have enjoyed long tenures including Lt Col R S Baker, Tony Keen, Bill Bush and Carol Clift who served between 1999 – 2021, making her the longest serving Secretary in the meetings history.

A lot of hard work is involved in setting up a Point-to-Point meeting. Most of them are held on working farms, so about a month before the due date the Clerk of the Course has to start organising a work schedule, with fences re-birched, if necessary, miles of running rails have to be assembled, wings put up the fences, and allocating tasks to the army of volunteers.

John Tuck has been Clerk of the Course at Didmarton for over 35 years, he has done a huge amount of work and with great dedication – dedication to producing a first Class course and a genuine and fair jumping test.

The process is reversed after the meeting with the course returned in pristine condition to the land owner. That it all works like clockwork is a testimony to the skills of all Meeting Secretaries. Recent years have seen additional challenges, with Equine Influenza and two seasons affected by the Covid virus.

This meeting has survived everything thrown at it during its 75-year history. It has a loyal band of sponsors who are vital to its future. Hopefully they have all survived the un-precedented challenges of the last 12 months and will be there to help celebrate the courses 75th anniversary. 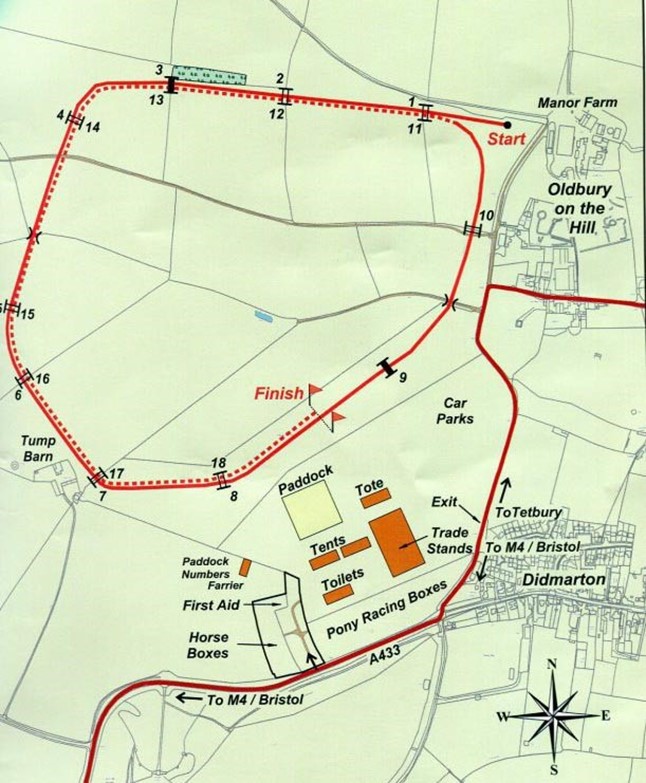